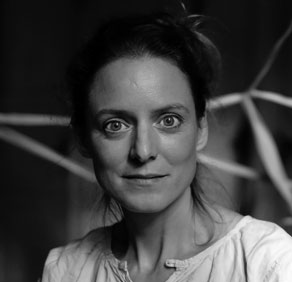 is a performance and theatre artist. Her work incorporates theatrical performances, site-specific installations and time-based media.
Anna completed her acting training in London (2000), after which she worked at various German- speaking theatres. In 2007, she set out to create her own theatre plays, which soon crossed genre boundaries to the visual arts.
Since 2015, she has been studying Visual Art at the Academy of Fine Arts in Nuremberg and has received the title “Meisterschüler” in 2018.
In 2014 she did an eight week – long performance, travelling as the fictitious character of the “Money Pilgrim”, following the trail of the phenomenon “money”. The topic “money” never let go of her since and she shares her experiences in exhibitions.
The pilgrimage to money is the third part of a trilogy. It‘s called „Ofrenda“ and Anna is posing the question: what signifies sacrifice in our contemporary society.