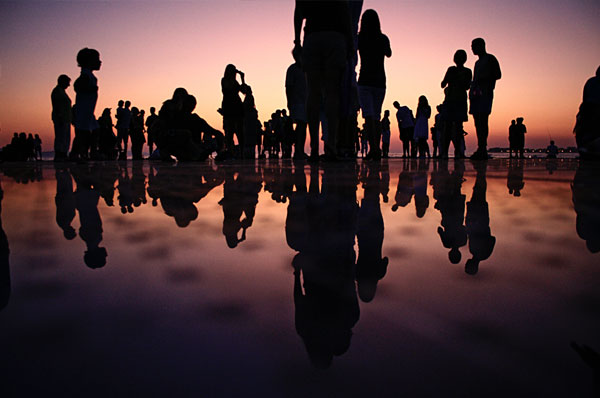 Here we are, in the age of the Anthropocene. Here we are, in a phase, which in terms of Spiral Dynamics might be considered as “orange”. We have inhabited our planet and the world has become small. We have developed a technology that promises, following the Israeli historian Yuval Noah Harari, a long, happy and godlike life for anyone. We lost the sense for gratitude and humility. Individualism and the naive belief in self-organization have taken over collective responsibility.

We know, that systems change is necessary. Celebrating the emancipated individual we believe, that this change is brought about by heroic individuals. We have a strong interest in increasing our own importance and meaning as a human being, and we believe in improvement and EGO development. In our competitive societies this means, we strive not only for becoming better human compared to our past; foremost we strive for becoming better human beings compared to others. Competition is the driver and motivates us to grow our personal self-improvement, meaning, impact, superpower and knowledge on a daily basis. We have overcome the “red” survival of the fittest, the “blue” patterns of obedience and reward and enjoy “orange” competing, now in all walks of life, in who has the best genes, the deeper knowledge, the higher consciousness.

Truth is not in the hands of religion and science anymore, it has rather become an individual spiritual journey. Spiritual journeys became an EGO trip. And Spiral Dynamics, which originally was meant to use differences in developmental stages in order to communicate with each other, transformed into a path to spiritual elitism, and now the more enlightened noble looking down on the petty folks, who are not “teal” enough.

Going on a spiritual journey to strive for a better self, can be just beautiful if we leave the “orange” mindset of competition behind. This also means, letting go of the naïve belief in self-organisation, and letting go of the ideas to find power in the emancipation of the individual. There is little value for life in the individual hyper-enlightenment conditions of Samadhi, Turija, or others brought about by meditation or drugs. We need a critical perspective on spirituality and EGO development.

The starting point for any spiritual journey is still the “orange” competition society and consumerism. Competitive EGO development invited an entire industry to evolve. Spirituality is, following the US-American management scientist Ron Purser, on offer and sometimes for sale. We can participate in anything we wish for and spiritual tour guides provide. We are best at offering and consuming all kinds of seminars, retreats, and psychedelic drugs (like Ayahuasca and LSD), and we are even better in creating idols and following Gurus. In the 21st century, we constantly wish to enhance our performance, to improve our health, and to advance our consciousness.

We sport a fake practice. We are happy to move from one seminar to the next, anxious to turn the learning into change and a congruent, new practice. We rather stay on the journey, never arriving anywhere. We become dependent on those, who offer the journey, who seem to be ahead of us, we even find ourselves being suddenly part of cult-like communities. Often, safe spaces are turned in fake spaces. We find ourselves prepared not for the challenges of life but for the next course, seminar and retreat. And on top we strive, once more, not for our own development, We rather compete against the other padawans in becoming as enlightened as our idols and Gurus already seem to be. In the end, we sprinkle our daily life with pockets of higher consciousness, while our fridges still burst and we slave ourselves away in competitive 24/7 jobs.

So what instead? Maybe, a next step, a change of perspective is needed. Maybe it is time for creating a new frame. If “there is no right life in the wrong one”, as the German philosopher and co-founder of the critical school Theodore Adorno once said, we might want to find a new narrative to nurture the right life. The world needs another and yet critical thinking, it needs Anthropocene Thinking, moving away from simple truth to resonance and thrivability.

Some of us already hear the “green” calling of solidarity and community, moving away from individual development into a collective world. It is the path of open – and at the same time critical – minds, hearts and souls towards spirituality. It is the path of meaningful and critical conversations into forwarding integration, into a collective organisation and into a safe space called Earth. We might want to include the voice of Gaia into public discourse; we might want to move on from the esoteric romanticism of our days to critical spirituality as a collective journey. We might want to tune in to earthly needs again, to see all species living and being together again, interdependently, in order to survive, grow and thrive.

Leaving “orange” behind, might be the solution not only for the development of our consciousness but even more so in the search of the common good, in achieving a grown-up democracy – conciliation instead of competition. How would it be, if human beings worked together again instead of competing – with each other as well as animals, plants, things –  being able to take care of each individual and the common good? What if the group took over responsibility collectively for the well-being of each member, each being again? – At this point, the idea of Earth Stewardship shines through. We might want to talk about interconnectedness, not only in terms of bio-psycho-social models of human beings in nature but in terms of the Gaia hypothesis, acknowledging the thrivable interconnectedness of the living world. We might transform from human beings into together beings. Collective development will be the driver. Thrivable Together Being is our goal.