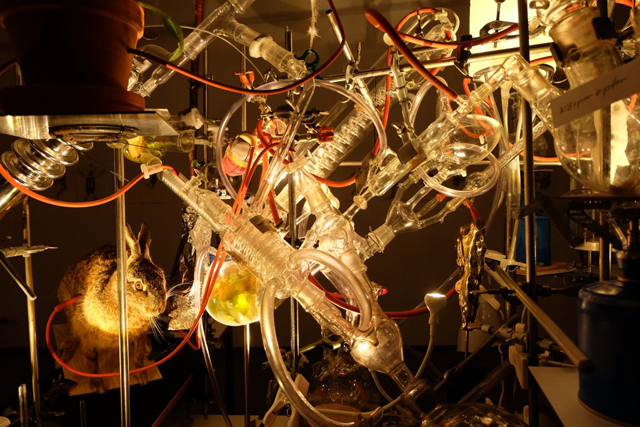 To this day, the impact of humankind on Earth has been influenced and encouraged by the human spirit of discovery, conquest, domestication, exploitation and optimisation, thus without thinking intensively about the effect one’s actions might have. We have done this, largely without taking into account the impact of our individual actions: discovering, measuring, using, exploiting. With this rather unconscious attitude, we have brought about changes which can nowadays be clearly seen from outer space, and finally they have become apparent in their dimension in full force.

The term Anthropocene is a Design Term for these changes, regardless of how serious and temporary the interventions are, since the term refers to a paradigm in which human behaviour can be reflected globally. In order to come to a thinking that can be called ‘ Anthropocene Thinking ‘, we need to develop, from the largely naive behaviour – dealing with the Earth in a subordinate way to our own basic needs alone –  to a conscious, mature attitude to develop the Earth – leading from the negligent deformation and the tearing of the Earth into a conscious design of it. But what exactly can we imagine Anthropocene Thinking to be?

The thesis of the Anthropocene raises the question of how we want to live on Earth in the future? How do we learn to better understand the effects of our actions on a large scale, and what attitudes and actions follow so that long-term life for humankind on Earth is possible? We have created our relationship with Earth through perception and the actions that follow our perceiving system. The Nature of Perception is what has shaped the Earth, and it has produced our needs, which in turn led to further actions, such as deformations.

Since perception, especially since the cognition driven by desire, our very needs are the basis of action. Today, this requires a new, a critical consideration of the needs in relation to the world, as well as a critical consideration of our perceiving sensors. We move into a paradoxical, cryptic field, which can be compared to the operation of a living being at the open heart, the interior of which we have never seen before.

Yet, which living being are we looking at? The Earth (GAIA, Lovelock) or humankind? What kind of exploration is needed? Does the path lead into the interior of the Earth, the Interior of mankind? Is the Earth looking at us, or are we looking at the Earth? Could Anthropocene Thinking be such a thing in which action, effect and responsibility merge into one?

If we understand artist processes as seismic human activities, then they, the artists, are the ones that are already expressing things in their works long before these things are being recognized by the public. Works of art are often materialized, visionary, philosophical statements functioning as harbingers of a soon to occur social discourse. Yet, artists can rarely say anything about their art, for what has to be said is already included in the work.

Artists are receiving sensations of resonance. The origin of these sensations or rather vibrations – sometimes referred to as inspiration – is often unclear and usually stems from a non-linear, non-causal-logical artistic process:  works develop from a mixture of subjective experience – from history, from future and at the same time the mirroring present. Long before topics of society become recognizable, these are often recognizable as “anticipations” in works of art.  This often makes them incomprehensible, complex, bulky, abstract, misshapen, linguistically difficult to grasp, disturbing, provocative and elude the immediate logically comprehensible explainability.

Arts can take over a role in society concerning our perceptions and definitions of the world. It can add new sequences to civilizational algorithms. Arts has the energy to falter previous perceptions of our Realities and can instigate transformations.  Arts creates seemingly different realities. Arts can even become political, when it disrupts our perceptual systems in such a way that our existing views are being questioned or that the contained perturbations swirl, destroy, or separate us from illusions. Arts directly works on perception and is thus a direct intervention in the operating system of existence.

If experiences lead towards the limits of the understandable, recognisable and leave behind previous perceptual patterns, they are often understood as uncomfortable disturbances instead of as welcome gifts. Because questioning perceptual habits disrupts the often comfortable place we find ourselves in, gives an unsettled feeling. Avant-garde often occupies a lonely contentious place in the society to start with, up until the general gaze has as well become accustomed to the new.

It is about re-evaluating previously once valid perceptions, so that new, more sustainable principles can be found to align life around them: a Metanoia.

As a consequence, the change in perceptual habits affects the lives of each individual.  If there is a critical mass in the design of perception of a periphery and thus the upheaval of the generally valid definition of the world, this can create a tipping point in our perspective onto the world. Everything can change: That is R-evolution. We seem to have reached such a phase of a possible tipping point since the photograph of the Earth inscribed itself from the moon into our cellular matrix. Then, for the first time, the globe could be looked at as a whole. From the perspective of the view of the whole, the thesis of the Anthropocene has evolved.

To truly understand this, it seems necessary to generate a quantum leap in perception to Earth, one of recognition. This quantum leap creates the space for new definitions of reality from which a new relationship with the Earth can emerge.

Arts, as a socially emergent discipline, has no purpose other than to be art. Arts has no intention, even if there is a great temptation to put its qualities to the service of intentions. On the other hand, arts is research, such as the central research of perception from which quantum leaps arise – especially, if arts remains free.

When artistic practice moves into purpose-free spheres, something might be able to shine through, which questions the recent patterns of perception. Arts leads to the paradox that artists go into practice without being able to expect a linear result. Being able to create artworks in which our perception can deepen or expand is a great joy. Whenever perception is broadened, the view of the world is expanded and we might understand better where we are. It is not a question of a change of perspective, rather it opens up a completely new view – as if developing new sensory organs.

An artistic Science consists of initiating processes of materialization that make the invisible to be seen, the unspoken to be said, the silence to be heard. From multisensory processes artistic creations can arise, often still in classical forms – like music, sculptures, paintings, installations, performances, literature, theatre – they point with the finger into the unknown. It is precisely the art’s freedom of purpose that presupposes to produce these relevance, which cannot happen to be generated in science (linear thinking), industry (seeking innovation) or politics (introducing the appropriate reform).

Artistic research begins where the thought-to-be-secure knowledge ends. Artists enter spheres of non-knowledge, non-skill, non-wanting, no intent. They blindfold themselves. From this state of “non” the other may evolve. Or may not. Sensory delivery is an unknown and often even more so, an existential issue. The system of an artist in is a multisensory battery that absorbs everything –every twitch, move, craft, doubt, despair, sound, dream, sleep, doing nothing, not thinking, receiving, feeling, guess, suspect, drift – the artist is being delivered to the process. The ability to find and shape the detections found in this delivery as artworks, is the gift of an artist. Only from a nothingness something can occur that makes a difference to existing ones. Failure and success do not exist – there are only processes.

Especially the term “arising out of the nothing” permeates any complexity without subverting it, and allows it to operate in Multi-linear spaces. Here, Art is the Anti-science. This requires a willingness to perceive that acts in respect of the unknown. And it might create uncertainty, irritation and sometimes fear. Yet, it also creates openness, increases perception and deepens awareness.

In order to give artistic practice an appropriate place, it is necessary to equip artistic research with an appropriate captial. Expenses of the artistic process should be comparable to the detection attempts of the Higgs-particles at CERN near Geneva. Our perceptual conventions are set in such a way that they present these particular challenges to recognize what artists my call new Higgs-particles of perception.

For this purpose, perceptual and sensory refinement processes are carried out in an eusg artlab. It might be understood as a kind of an “Antenna Training” with the aim of making one’s own perceptual and sensory organs (antennas) more capable in order to receive possible codes from non-knowledge. The traditional artistic strategies and thus their viewing methods offer a solid entry point. Nothing more.

However, these trainings can be gateways to artistic processes in which every discipline, all previous knowledge and ability is needed and used, gateways to everything that humankind is aware of already and might be able to recognize next, gateways beyond arts towards alchemy, the art of the arts.